Happiest of Wild Wednesdays to All!

With January falling by the way side, February has been able to swing into full-view! And with a lovely leap-year party looming, let's look lively as we march towards March. Hinting at what may hang on the horizon, I present fellow artist and a most perceptive pal...

Male orangutans are giants of the jungle, causing quakes that rip and ripple through the leafy tranquility of the treetops. In the wake of their sway, these massive mammals leave their air of nobility alongside a massacre of masticated fruits and nuts.

But despite the intimidating gargantuan figure, these simians can be quite sensitive. Solitary and wide-ranging habits leave these juggernauts ample time to ponder the mysteries of the universe, and perhaps even comment on the primate condition as they brachiate among branches. Towan (hailing from the jungle of Seattle) taps into his expressive side through his love of painting, making inner emotion known to the wider circle of life through bright, non-toxic colors. Moody and introverted, this dreadlocked dreamer has the soul of an artist that is often wrapped in a burlap blanket, gazing out at the world going by.
Posted by Jess at 9:00 AM 3 comments:

Welcome one and all to the year of 2012 C.E., also known by the Chinese Zodiac as the Year of the Dragon. It just so happens that I have chosen to honor this auspicious animal with a stately portrait. Help start the New Year off right. And thus I present to you...

Native to the island of Komodo (and a few others in the area), this cold-blooded champion of the ages spends his days leisurely stalking and ambushing prey.  With poisoned saliva and a fiery tongue, this dragon certainly breathes fire for any it sinks its teeth into.  With an island all to himself, this massive meat-eater has his pick of plentiful prey - perhaps that is why his mouth is always watering.  Tough-skinned and strong of heart, this ancient beast fears none, and is respected by all.  Ferocious in fighting and fast to feast, it is no wonder myths and legends surround such a revered reptile.

Komodo Dragon Fun Fact: young dragonlets scamper into trees soon after hatching, and live up in the canopy eating bugs and eggs until they get a little bigger. This way, they are not eaten by their adult counterparts (who can't climb) - and return to terra firma once they can stand their ground.
(This nibble of knowledge brought to you by the San Diego Zoo!)
Posted by Jess at 9:00 PM No comments:

It looks to be another glorious week in the land of Earth - so filled with a myriad of mongrels! Today brings the distinct pleasure of presenting the next featured wild thing... The Sumatran Tiger!

Trained to Tread
Though the dainty devourers of deer and tapir are deemed the smallest of the bunch, these Indonesian island cats certainly live up to the reputation of power and strength that humans have bestowed upon this brilliant beast for centuries. Ablaze in the water yet camouflaged in the open, tigers are masters of the stalking in stalks. Once that pair of bejeweled irises sets its sights on you, it is likely wise to change your afternoon plans. And this specific subspecies has certain swimming strengths seldom seen in its mainland counterparts; With webbed toes, the treadworthy tiger prefers to take its predominantly land-based prey out to lunch on the water, on the predator's dime.
Posted by Jess at 5:33 AM No comments:

This inaugural event is the first in a series of posts I plan to publish, tracking my latest painting projects as they progress! Currently, this so happens to be a series of animal portraits showcasing the Species of South East Asia. With many more to come (in the form of tri-weekly trackings), I present to you the first mongrel of the bunch...

Only walks in certain woods shall find such feathered frugivores;
Tis only South East Asian forests where the mighty hornbill soars.

Flying high above Indonesia's dense canopies
This crimson-crowned king loves to gaze upon the seas.

For stretching round in all four direction
Lie the oceans in deep blue perfection.

Bonding for life in a mated pair,
Hornbills live a life many species don't dare.

While the female holes up in a tree to egg-lay,
The male departs, off on a familial fruit foray.

Though berries may elude him he presses on,
Ending his search only once the sunset has gone.


Hornbill fun fact: These casqued crooners have long lovely eyelashes that are actually modified feathers!  That sets me all aflutter.
(This nibble of knowledge brought to you by the San Diego Zoo!)


Be back Monday for the next equatorially-excellent species in the series.
Posted by Jess at 9:00 PM No comments:

In Want of Water

Water. The source of all life on Earth, while gracious in its giving, is not always fair in its sharing. As some are flooded with its fortune, others are desiccated in its denial.  (But not the Nile)


Bathed in liquid life, the bromeliad is in a class all its own. In striving to become closer to its dihydrogenously oxygenated deity, it has forsaken the familiar forest floor and lives a nomadic existence up in the canopies of the jungle. It throws its green arms open wide to welcome the near constant rain. And what the bromeliad receives, it likes to pay forward; the water it retains in its cup of tightly-weaved waxy leaves acts as a micropond way up high for arboreal amphibians and arthropods to lay their eggs in. Safe and secure swathed in the fortified fronds, tenacious tadpoles and irresistible mosquito larvae grow big and strong.  Then metamorphosize to grow big and strong all over again.


In stark contrast to the jungle's decadent display of liquid lavishness, the desert is of the more humble tumbleweed type.  The charismatic cactus is the star of stark & starved soils. It is a sad sort of succulent, forever trapped in sway to the withholding ways of water. Expanding and contracting like an accordion, the cactus plays its melancholy tunes of the water blues.  Yet in times of plenty, cacti celebrate the bounty of water with symbols of beauty - unleashing bold yet delicate flowers upon the landscape, canvassing the country in rich sights, smells, and styles.

Hornbills on the Horizon...

New ideas are taking flight in the Land of Jess... with upcoming projects in the works, and older pieces to storytell, there is likely to be a flurry of flora and fauna gracing these audacious archives any time now.

Everything and everyone has two sides. Star Wars knows this, as do the zen teachings of yin and yang, as does the story of the great Dr. Jekyll & Mr. Hyde; and all reveal to us the nature of those two sides. A light side and a dark side. An inside and an outside (obviously the inside is the dark side, since light can't pass through flesh and bone). To get to know someone, you must understand them fully - to the core, the marrow, whatever you'd like to call it. This is the relationship I have developed with a good friend of mine: the ever stellar Steller Sea Lion.
Sure she's plain on the outside, with a drab brown coating of fur and fins streamlined for moving through the water like a torpedo of blubber. But there is so much more to this marine mammal than a boring hide. What hides under this hulking beast's rippling layers of fat and tissue is not one but two inner layers of innards. Lurking beneath the surface lie the muscles and the bone. 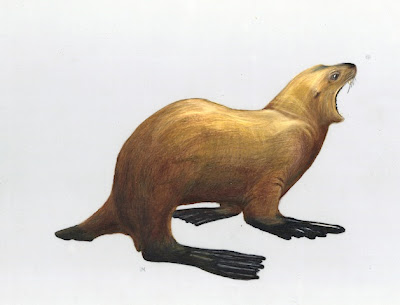 Were I to arm wrestle my friend the sea lion, I would surely be defeated simply because of the sheer volume of this beast's muscle fibers. Not to mention how slippery their flippery are. Plus, they are related to bears. Massive pectoral and dorsal muscles work in concert with the shoulder to power through the ocean's depths. And the construction of that actin action and myosin movement are informed by the form and function of the deepest layer of this deepwater creature. 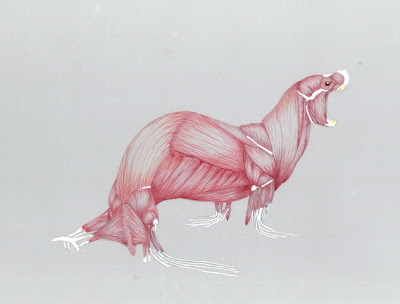 The skeleton is an ossified masterpiece of evolutionary ingenuity. A jigsaw puzzle of calcified fortification enables these paradoxically amphibious mammals to be free in the sea and yet stand on land. Massive scapula bones provide excellent attachment sites for plenty of muscles to do their flexing and extending for swimming in water and hobbling about on shore. 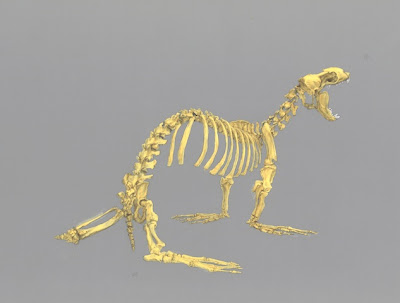 Taken on its own, each piece of this sea-worthy vessel is a beauty to behold. But in concert, the cogs fall into place and turn in unison, keeping time with the pace of life. And from this symphony emerges the necessity of inner and outer sides. The requisite existence of both light and dark is revealed. 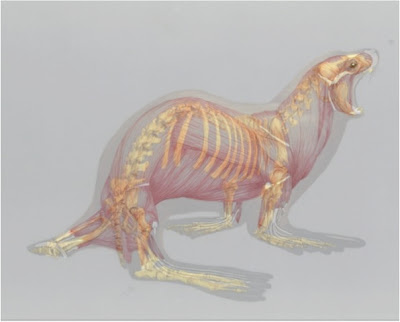 Jess
I like being outside. With a degree in Nature, a certificate in Sketching, and a penchant for Primates, I hope to become a field ecologist of some sort, studying animals in the jungles of the world!